The heart and the real innovation of the electrochemical cell proposed by RedElec Technology SA is a three-dimensional electrode formed with carbon particles. The use of a particle bed is very favorable for the transformation, since the contact area between the three-dimensional electrode and the substrate is much greater than what could be obtained with a conventional planar electrode. In the particular case of the reduction of an insoluble substrate, this contact is facilitated by a filtration of the suspension through the carbon bed.

The carbon material used differs from materials usually constituting the electrodes in electrochemical cells. The carbon is activated so as to present on its surface a maximum of oxygenated functions having structures similar to quinones. By providing electrons supplied by the power source, they can be transformed into structures similar to hydroquinones. These latter have a reducing ability that is continually regenerated by the addition of new electrons. They can thus be considered as mediators groups immobilized on the surface of the carbon. The figure below shows schematically the structures found on the surface of the carbon and their transformation by reduction (consumption of electrons) or oxidation (release of electrons).

By varying the voltage applied to the electrode, it is possible to change the redox potential of the oxygenated surface functions and thus precisely controlling the progress of the electrochemical conversion. The possibility for these oxygenated functions to interact directly with the substrate to transform adds to the selectivity of the transformation.

The carbon material used has a high stability that allows it to maintain the same activity over several months of operation. Moreover, its cost is very small compared with the electrode materials commonly used in electrochemical processes (eg. noble metals). These features allow the process proposed by RedElec Technology SA to be advantageously distinguished from other electrochemical methods available in the industry.

The structure adopted by the electrochemical cell of RedElec Technology SA is shown schematically below using the example application of the reduction of indigo. The cell is divided into two compartments: the cathode compartment wherein the reaction of reduction takes place, and the anode compartment where the oxidation reaction is performed. The two compartments, each consisting of a plastic frame, are separated by a membrane. To ensure the neutrality of the electric charges between the two compartments, the membrane allows the passage of ions while preventing the mixing of the other constituents of the catholyte and the anolyte. The cathode consists of a bed of carbon particles in contact with a current supply. The particles are maintained within the reactor by means of grids located at the inlet and at the outlet of this compartment. 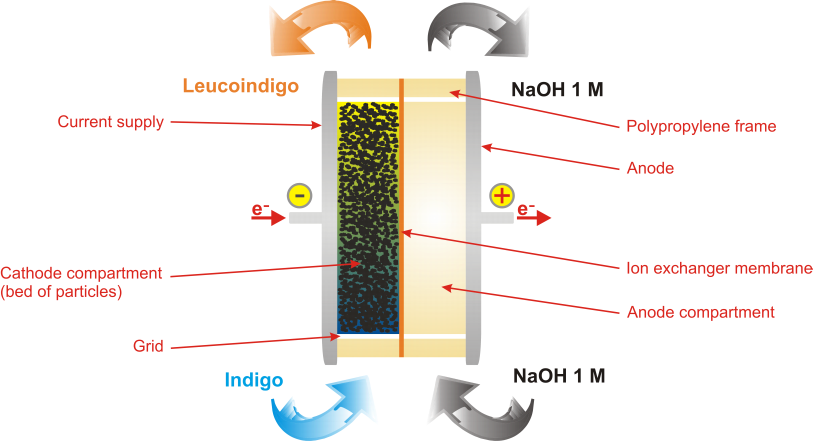 The following figure shows a simplified exploded view of the electrochemical cell developed by RedElec. The cell is mainly composed of two stainless steel electrodes, between which the two polypropylene frames are pressed, and an ion exchanger membrane.
A complex hydraulic distribution system integrated into the frameworks ensures the homogeneity of the flow within the anode and cathode compartments. A significant mechanical development was implemented to allow the cell to be completely independent from the point of view of sealing. 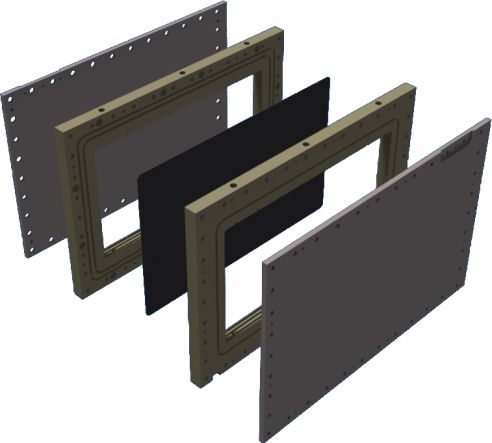 An electrochemical reactor is composed of several independent cells. The productivity of the reactor depends on the number of electrochemical cells that constitute it. The figure below illustrates a reactor composed of five cells. A stainless steel container receives these cells as well as the hydraulic distribution system. As required by the electrochemical method, the flow may be distributed serial or parallel to each cell.
Maintenance of the system is greatly facilitated by the fact that each of these cells is mechanically, electrically and hydraulically independent. Thus, the revision of the eventual disturbing element does not require the complete shutdown of the system and therefore production. 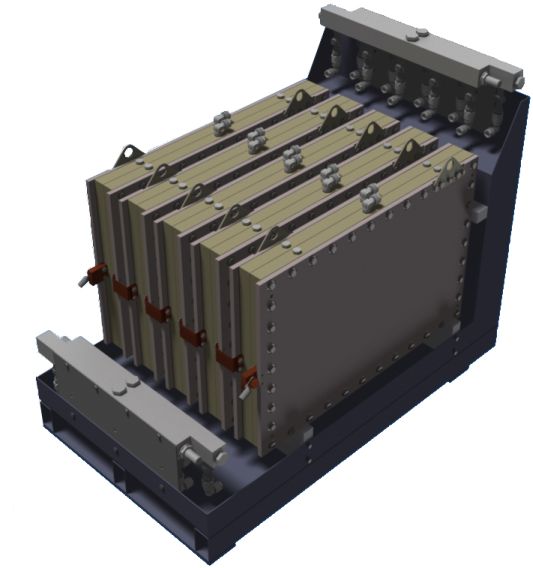